Charkiw Opera as guest in Weilheim

The ensemble of the Kharkiv Opera from Ukraine gives a guest performance on St. Nicholas’ Day in the parish church of the Assumption of the Blessed Virgin Mary.

Weilheim – «Culture connects and sets a sign of peace». With this message, the orchestra and choir of the famous Ukrainian Kharkiv Opera will give a festive concert worth seeing and hearing on  the 5th December at 6.30 p.m. in the Weilheim Stadtpfarrkirche: “Gloria” by Antonio Vivaldi and other pieces for Advent.

Kharkiv is the second largest city in Ukraine and has been under constant bombardment as a frontline city since the beginning of the war. The Kharkiv Opera building was one of the first cultural victims of the Russian attacks: it was completely destroyed on 8 March 2022. As a result, the ensemble of the National Opera lost its artistic home. A part remained in Kharkiv and has been performing there ever since, among other places, in air raid shelters. The larger part fled to Slovakia and found friendly reception in a small town after the Austrian border to live there and continue their artistic work. The ensemble is able to rehearse in an empty theatre. Their tour «The European Way» has been taking the Kharkiv Opera through many European cities since April, introducing them to Ukrainian culture.

On the initiative of the concert agency OPEN MUSIC PROJECT, led by Irina Frenkel, and SOLIDARITY UKRAINE of the Weilheim-Schongau district, the 70-member ensemble, consisting of orchestra and choir, will stop for a special concert in Weilheim after stops in Biberach an der Riß and Munich, where, with the generous support of the parish priest Engelbert Birkle, an optimal space for the spiritual programme has been found in the town’s parish church of the Assumption of the Virgin Mary. Vivaldi’s “Gloria” in D major was forgotten for a long time, but today it is one of his best-known sacred works.

The concert is at the same time a thank-you to the people and businesses of the Weilheim-Schongau district: for the manifold initiatives and help in favour of Ukraine and refugees from Ukraine.

Remaining tickets (15 €) will be sold one hour before the concert at the box office at the church entrance. 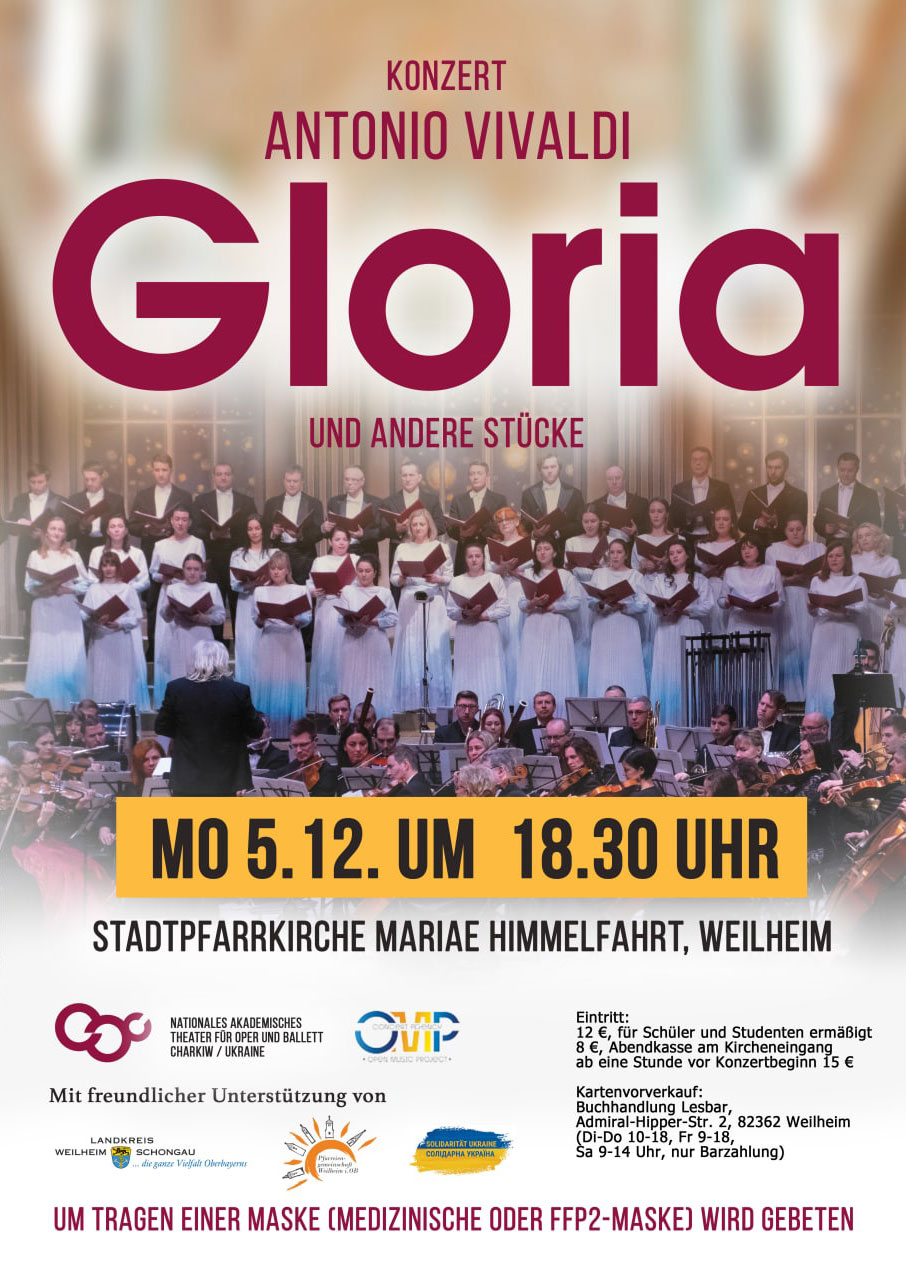